Join Date: Oct 2013
Location: South Texas
Posts: 85
2014 FJR First Valve Clearance Check
With 34500 miles on the odometer and nearly 25000 miles on the spark plugs I decided to check the valve clearances and change the coolant for the first time. To prepare for the job I ordered the oem o rings, valve cover gasket, rotor cover gasket, and picked up a gallon of Prestone coolant and Permatex gasket something or other. Spark plugs and air filter too.

SIDE COWLINGS AND DASH PANEL
Since I was changing the coolant the first thing I did was to remove the dash panel and both side cowlings. To stay organized I put each component's fasteners into separate bags or boxes. On the left side I removed the cowling with the lock box still attached, and on the right side I left the bottom panel attached. Just remember where the fasteners go during reassembly. 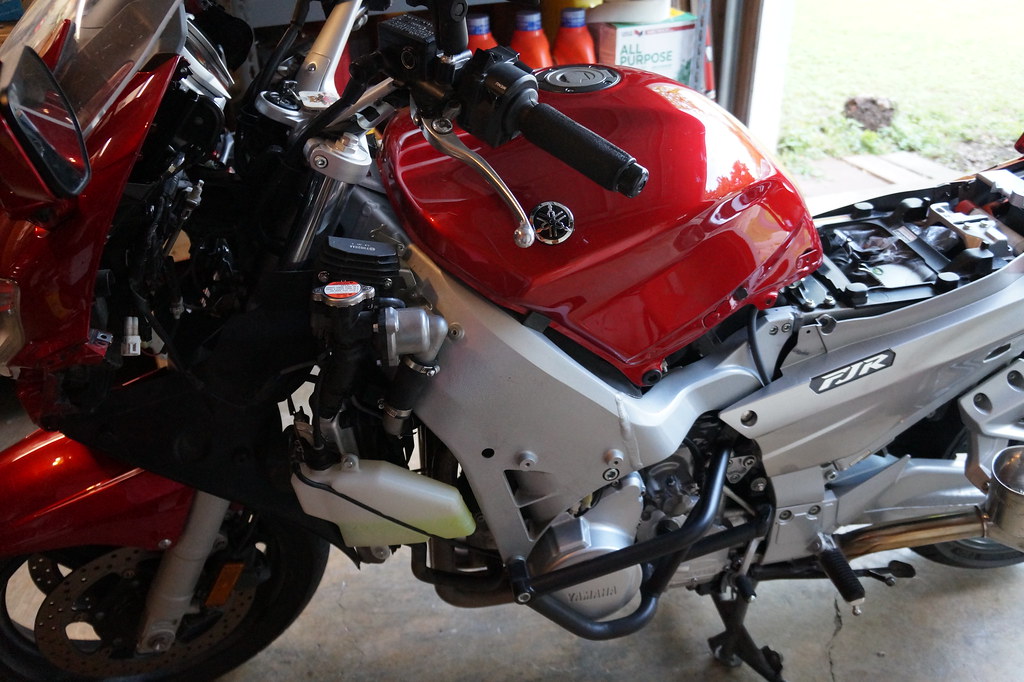 REMOVING THE FUEL TANK
A straight forward process that includes the T bar and heat shield held in place with a single screw rivet. For me the fuel line always leaks a little so a rag would be in order to avoid gas spills. 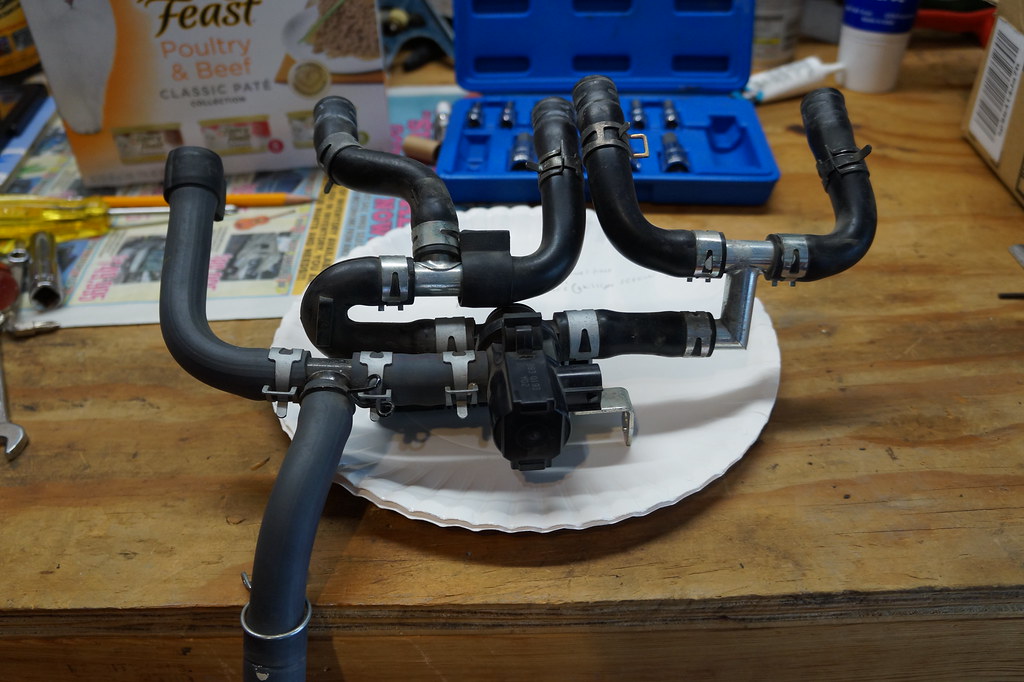 Now we are ready to remove the coolant pipe, but first we must drain the coolant. There was also a fair amount of grit and dirt in the recesses that I spent an hour or so cleaning with q tips and rubbing alcohol, my preferred cleaner.

To remove the coolant pipe the electrical lead must be disconnected and the hose removed completely. Putting the hose back on during reassembly is the hard part. I did it by putting the hose more or less in place and smearing a small amount of silicone grease on/in both ends of the hose to ease getting the pipe started. There are only two bolts that attach the pipe to the cover. 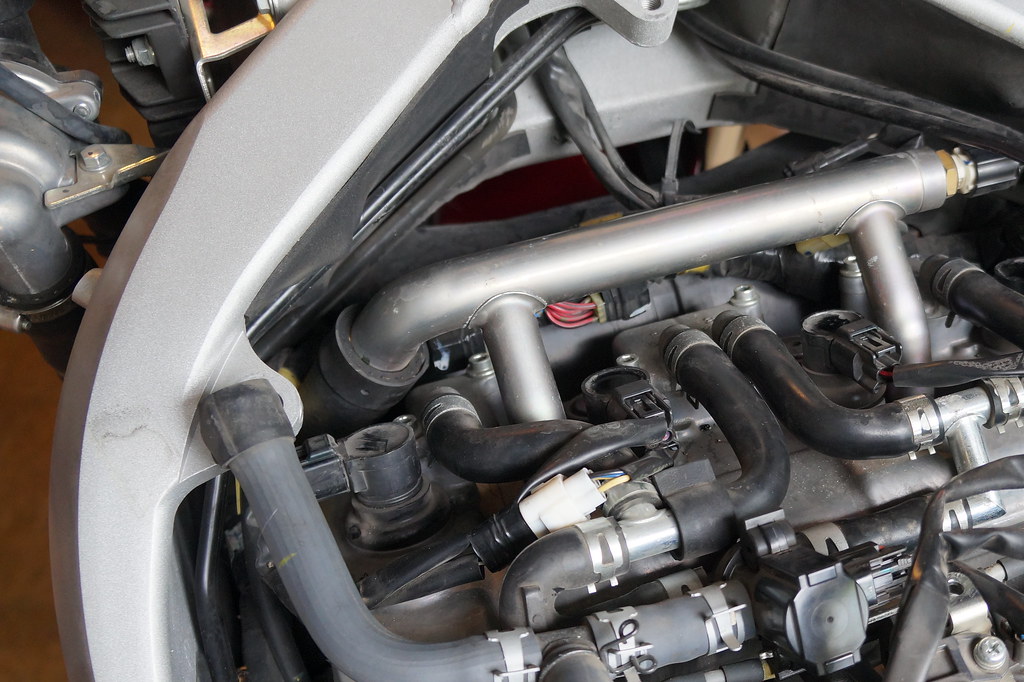 Showing the coolant pipe, hose, electrical, and the white connector.

Pull plug caps and clean the area with a vacuum if possible.
Disconnect electrical leads and leave the sensor near the left front and the bolted in brace near the right rear alone. The wiring harness may then be pried from the brace and also pried from the base that also serves to support the throttle cables. By freeing the harness this way we will gain enough clearance to remove the cover itself. 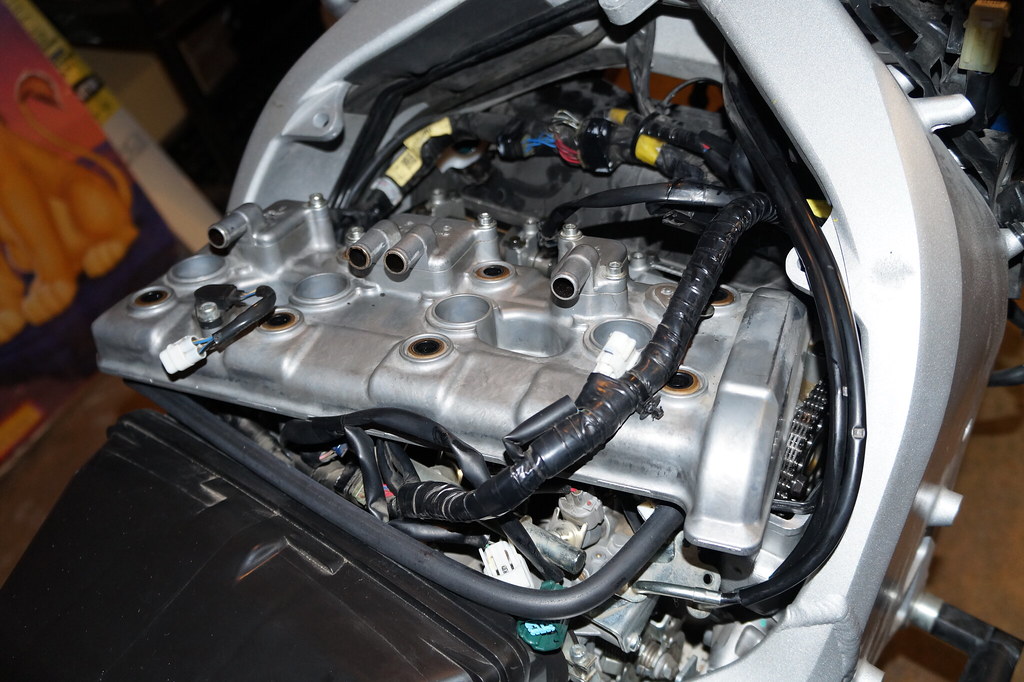 With the wiring harness pried loose in two places and the throttle cables unbolted and pushed to the outside the cover is easy to take out and put back in.

CHECKING VALVE CLEARANCE
Using a couple of feeler gauges I rotated each cylinder to TDC by turning the nut clockwise that is found inside of the rotor cover and connected to the cam chain. I got the following readings:

The exhaust valve clearances are somewhat loose while the intake clearances are somewhat tight or under spec. I initially thought I would try and shim them, but after consulting with the Mechanic at the Yahama dealer from where I purchased the bike I decided to follow his recommendation to leave them for now. He advised me to rotate the cams a bit 10 oclock and 2 oclock and check them again. When I did I gained .1mm on the number 2 and 3 cylinders (I did not check the others) and so I changed the .13 to .14 and the .14 to .15mm. The mechanic also stated that he does not bother adjusting the intakes unless they are .10mm or less. Not sure what he does with the exhaust numbers. Of course it could have gone the other way and I could have lost a .1mm or 2. The lesson is maybe we should always check other parts of the cam because the real clearance may not be what we get at the recommended place to check them.

REASSEMBLY
The only tricky part for me was keeping the valve cover gasket in place during the install. I used the original gasket saving the one I bought for next time maybe. So I smeared a very small amount of the permatex form a gasket sealant around the outside (but on the inside) edge of the cover to help hold it in place. It is pretty easy to determine if it will work or not simply by looking at it. Let us not forget that there are actually two pieces and that the inside ones may be checked by looking into the recesses where they sit. They did not require anything to hold them. Also if it does not seem to sit right it probably isn't. Finally make sure the tabs on the two ends lay flat against the head.


Join Date: Feb 2017
Location: Charlotte, NC
Posts: 301
Thanks for posting. I'll be doing mine soon and have been researching on what's involved. Great pictures and description.
--
tim

Join Date: Jan 2013
Location: Millgrove, ON, CA
Posts: 6,502
Lessons for next time.....
You might be able to get away with a low clearance, but I'd personally take the advice of Yamaha and not your mechanic. Just me. 0.02mm below is nothing but it is below spec. You'll be OK till next time, but if me, while I had gone to all that work, I'd have taken that cam out and see if I could at least swap a shim or two if I didn't have spares available, or perhaps even sanded a thick one down in that case. Proper procedure to follow of course.......

Check the clearances where the FSM says, lobes pointing outward. If you rotate until the lobes are up, you may get a larger reading.... I'd go by the book personally.

Not sure what you mean by exhaust clearances loose, they look fine to me. As a general guideline, I like 70% or so of max. They never get bigger, only smaller.

If you mean you smeared gasket maker on the inside surface of the gasket/valve cover, it is good practice to remove the gasket where you need to, put the RTV in the groove and let is squeeze out and remove any excess on the inside. Do this a couple of hours ahead of reinstalling the valve cover and all should stay in place. We don't want stuff getting into our oil, but, IF any breaks off, it should make it's way to the oil pan, and be caught by the screen on the oil pickup.

Join Date: Sep 2013
Location: Silver City, Montana
Posts: 2,411
Garage
I agree that your mechanic's advice was off the mark. You did all the hard work and actually replacing the shims is not that much more work. You could have adjusted all the valves so they were at the loose end of the specification range and been confident that the valves were okay for 50,000 miles.
N4HHE likes this.
Last edited by Pterodactyl; 04-26-2018 at 07:21 PM.
Pterodactyl is offline
Quote Quick Reply
post #5 of 17 (permalink) Old 04-26-2018, 06:46 PM Thread Starter
Nativeson
Member
Trainee Sport Tourer


Join Date: Oct 2013
Location: South Texas
Posts: 85
Yes it was a time consuming job, but I have no qualms about my work and the decisions I made. Except for the fact I did not dilute the coolant and I must now remove the left side cowling again. But other than that...

I agree valves should be adjusted to the wide end of spec. Exactly where depends mostly on what shims allow.

Conversely I find screw adjust valves usually increase gap between checks. My 2003 KTM 450 RFS has over 400 hours and due for valve job. Intakes go from the loose end of spec to tight out of spec in 15 hours. Exhausts behave as they always have, tight side of spec to loose side in 50 hours.

Join Date: Dec 2013
Location: Asheboro, NC, USA
Posts: 7,165
Quote:
Originally Posted by RaYzerman View Post
You don't have to remove the left fairing, just the side under the adjustable panel and the glove box panel. You can pull the fairing out enough to get a funnel in for the refill.
True but I found if you don't actually WASH the overflow bottle out with detergent & a brush once in a while it will over time get cloudy and nearly impossible to see coolant level through it.

Also, to the OP, I found it helps to remove the wind shield. I got really tired really fast of bumping into it, especially when I caught the edge just right on my eyebrow bone and it cut me.
passx likes this.
Russ
2007A


Join Date: Oct 2013
Location: South Texas
Posts: 85
Ran my FJR 2600 miles over eight days. The last year or so the bike has been a little hard to start taking two to three seconds instead of the instant start I usually get. Changing the plugs and a TBS did not address the issue, however the road trip seems to have fixed it. Guess I wasn't riding her enough.

Paid a visit to the Dragon last weekend 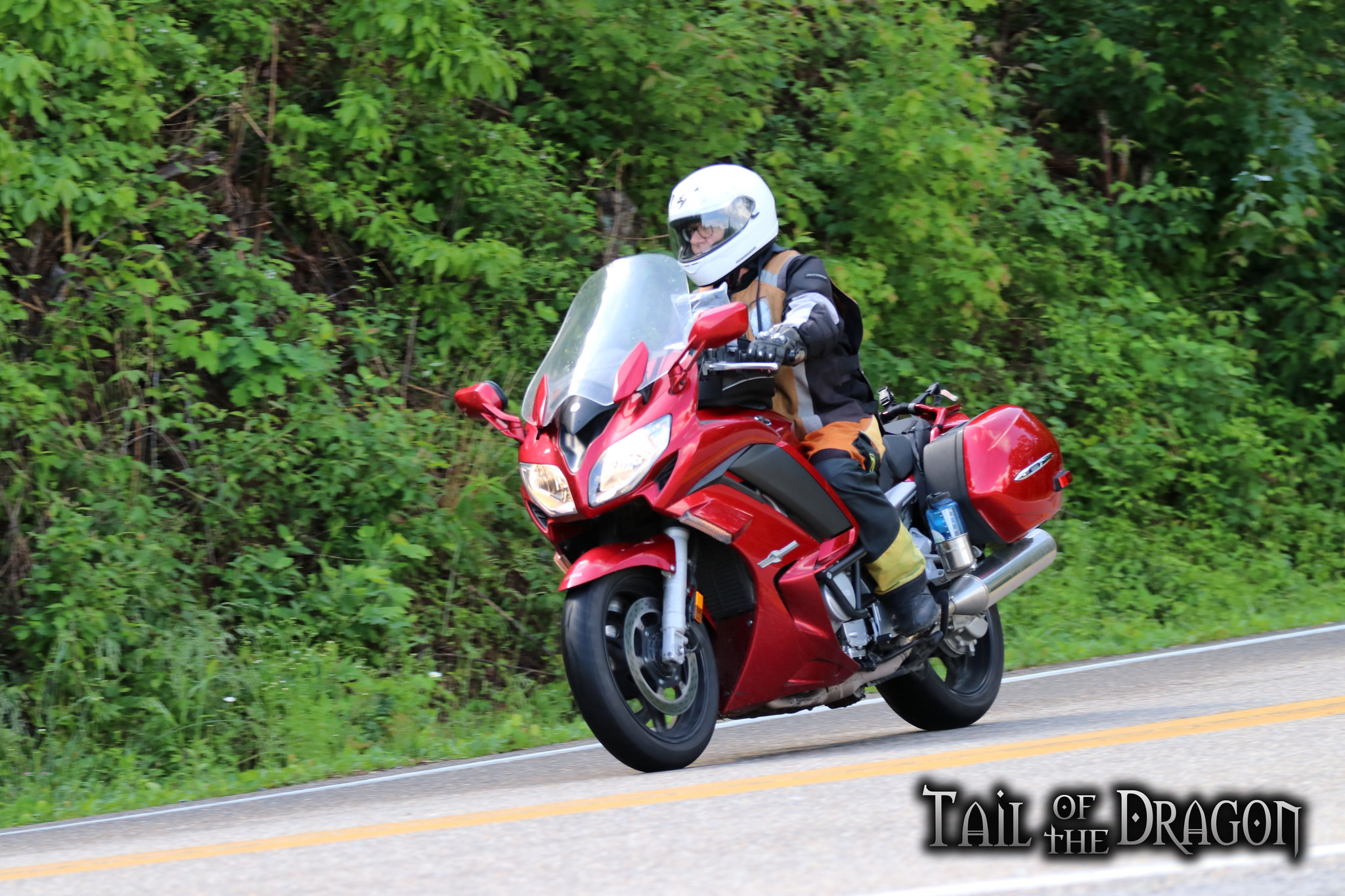 
Join Date: Jan 2019
Location: Just N of Seatle
Posts: 18
See it on YouTube
I'd like to note a YouTube video I really liked which was done about a year ago: