Why not expand your visual footprint (when your top trunk is off)?

Added it to my GIVI top trunk mount on the lip.

And ran the wiring directly to my switched fuse block under the seat.

Join Date: Jun 2017
Location: Seattle
Posts: 517
Garage
Quote:
Originally Posted by passx View Post
Jtdunc, how about expanding on this a bit ? Like what leds you used and how you wired it in ? It looks great !
Yes, I also swapped out my stock Yamaha tail lights for LED replacement units off eBay.

NOTE: you will have a white stripe on your bike during the daytime. It's not black.

As to the process:

They don't sell single LEDs so you can find another place for the spare or keep it as a replacement:

1. Consider where you're placeing the LED strip, plan out how much 18 gauge wiring you'll need to solder or Posi-Tap butt splice on. I used about 28" of red and black wiring for the + and - ground.

2. I ran the wiring under the GIVI top trunk, zip tied and threaded it through the right handlebar/top trunk mount.

3. You can route the wiring through the cutouts welded on top of the aluminum framing - big slots.

4. With more than 2' of wire, that should bring you to the middle of your under seat storage area where most have tools or an aftermarket fuse block.

6. If you are connecting to a switched relayed fuse block like me, I simply put a connector on each of the positive and ground wires, connected to the block and added a 3 amp fuse as a single LED strip this small are probably only running a 1/2 amp.

7. Once you have the wiring completed, you can affix the LED strip to the rear of your bike. For me, on the bottom of my GIVI top trunk mount - perfect lip for an LED.

8. These LED strips come with 3M double sided tape installed. You have to clean that surface with SimplyGreen or some other degreaser - let dry or wipe with a clean lint-free cloth. Then center and stick the LED strip on the rear of your bike.

Now if you don't have a fuse block, you could run your wiring to the ACC terminals in the fuse box next to your battery.

Or you could tap into your bike's running lights circuit. But that is another discussion.


Join Date: Aug 2018
Location: London, Ontario, Canada
Posts: 71
This strip might be better as it is black and incorporatates signal, running and brake lights... I was planning on getting one of them to try out - too bad Amazon's (Canada) shipping is a month out right now 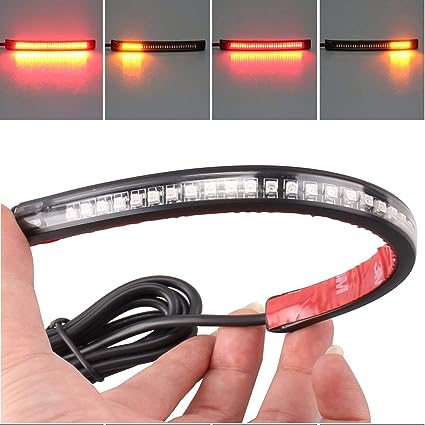 Join Date: Jun 2017
Location: Seattle
Posts: 517
Garage
[QUOTE=lue42;1251337]This strip might be better as it is black and incorporatates signal, running and brake lights... I was planning on getting one of them to try out - too bad Amazon's (Canada) shipping is a month out right now


I looked at those but ruled them out as I already have LED Tail lights and just wanted to enlarge my lighting profile.

Waiting for another set of 23" LEDs by the same manufacturer to put on underneath the silver bottom lip of my GIVI top trunk. A Halo around the back and sides of my top trunk. I'll posi-tap into my trunks LEDs.

Just don't want several things flashing at those behind me. Already have Skene's P3s on rear too.

Set up your FJR and show us.

Just showing once way I did it. I really only had to butt splice two wires and add connectors on the other side.


Join Date: Aug 2018
Location: London, Ontario, Canada
Posts: 71
Yeah you don’t want a strobe light show behind you so I wouldn’t want too much flashing going on. The solid glow sounds good.

I have brake lights in my Givi v47 so it might be too much with these too. I was looking to add brake/signals to the FJR side luggage so I will focus on that search. I had Admore’s on my Givi side bags on my last bike and felt really safe with the wider lights behind. Just have to find a nice quick release option like Admore uses - maybe I’ll look into using their side luggage wiring options. Expensive, but nice stuff.
Current bike: 2015 FJR1300A
Previous bike: 2014 NC750x
lue42 is offline
Quote Quick Reply